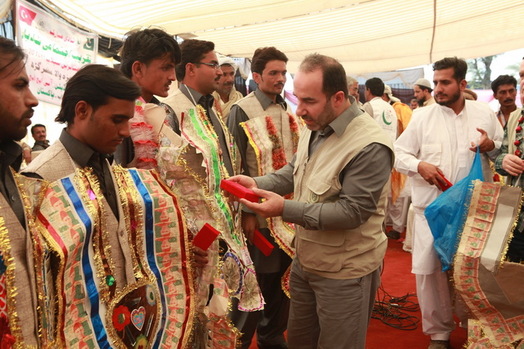 IHH Humanitarian Relief Foundation is carrying on relief efforts it launched in the wake of the flooding disaster. Muzaffargarh is one of the worst hit regions. The foundation has realized a dozen of projects in the area such as emergency aid distributions and lasting projects like building houses, schools and madrasahs.

Beside relief works IHH is also coming up with certain projects to meet social needs of the families affected by the floods. A team from the foundation visited Hamzawala, Muzaffargarh to attend a number of programs helped wed 15 young couples. All the expenses for the wedding that was attended by IHH workers in the area were met by the foundation.

Speaking at the ceremony attended by town residents IHH Secretary-General Yaşar Kutluay wished the newlyweds lifetime happiness and pointed to the long history of fraternal ties between the peoples of Pakistan and Turkey. The Turkish people will assist the Pakistani people as much as they can, he said, the two countries can overcome their problems by cooperating.

The couples were wed following the ceremony and the IHH team acted as witnesses. The couples were given various presents and the program ended with a dinner organization.

In the country to monitor ongoing humanitarian projects, the IHH team distributed bicycles to 100 children following the wedding program. In some areas children have to walk miles to reach their schools. The new bicycles will help the children get to their schools more easily. The children were quite happy over the presents and thanked the team members.