Hundreds of children are orphaned in Pakistan as a result of 2005 earthquake and 2010 floods. Initially, IHH has set up a social responsibility project for the needy families in the country. Starting from 2005, it started to establish orphanages there with the help of donors.

In order to add one more to the IHH orphanages in Pakistan which are so much favoured, IHH has laid the foundations of an education campus of 8 building in Haripur city on Sunday, 12th January.

Yusuf Bilgin, vice president of IHH, said that IHH brought aid to the region through various projects from the beginning. Bilgin, added that they are providing support to many refugee families from Afghanistan seeking asylum in Pakistan and they are one of the first teams reaching out to the families living in the camps.

Bilgin, asserted that as IHH they are not far from the region. “We are carrying out social relief in the region, lately we have worked on an orphanage” he added.

Highlighting the international standards of the school education that will be provided in the orphanage whose foundations were laid today, Bilgin said:

"Primarily orphans and poor students who cannot find the opportunity of education will benefit from this project. This is not our first project. There are already 5 orphanages we opened in the region where around 700 orphans and 2000 needy students are getting education. The school whose foundations we laid today is going to be one of the greatest educational institutions in the region. We are building an education complex of 4 buildings for boys and another of 4 buildings for girls. With the start of education in these institutions, we will get one step closer to the university we are considering to build here. We are realizing these projects with the generous support of donors in our country. The dormitories and the canteen in this orphanage complex is finances by our donors in Bursa and other social facilities are financed by our donors in Konya. We will realize the entire project with this support."

Bilgin, commented that IHH received a warm welcome in the region and Pakistani people had the chance to see the spirit of Turkish people. 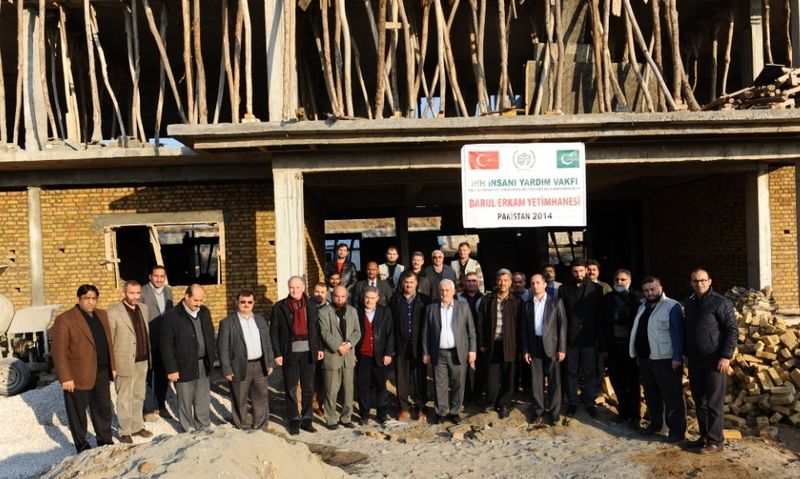 "The project getting two peoples closer”
Nedim Ahmed Khan, head of Khubaib Foundation IHH’s Pakistani partner in this project, asserted that this is a project appealing to the hearts of the orphans living in the country. Ahmed Khan explained that the orphanage opening in the region in order to provide education to the children orphaned due to various reasons along with needy students created a new point of view. He added that his generation knew about the solidarity between Turkey and Pakistan but the new generation does not know about it. Mentioning that several catastrophes in the region brought back those forgotten emotions, he said:

"Until 2005 relations between Turkey and Pakistan were at diplomatic level. Following the catastrophes we experienced in 2005, the brotherhood between two countries reached its previous level. Pakistani people got closer with the people of Turkey in the aftermath of these two big catastrophes. People here are grateful to the people of Turkish. The new education project of IHH got these peoples even closer. Our brotherhood that was long established in the past, did not mislead us yesterday nor today. We are extending our gratitude to IHH and all those working in the charities in the region.”

Followed by the speeches, the foundation of the new education complex was laid down. Meanwhile, a group of educators from Turkey visited and examined IHH orphanages in Pakistan.