Al Quds is the capital of Palestine!
The protest marches to support the Palestinians’ “Great March of Return” and outcry that Jerusalem is not alone were held initially in Istanbul and all across Turkey.
Palestine, Palestine-Gaza, Turkey 11.05.2018

May 15 is the 70th anniversary of the Great Disaster, Nakba Day.  For 70 years, the Zionist Israel continues to massacre also the elderly, young, female and children around the Masjid al-Aqsa in order to provoke Muslims. The Israeli government and soldiers continue their lawlessness without slowing down by attacking the worshippers with gas bombs and plastic bullets, terrorizing in Al Qibly Mosque with dirty combat boots, throwing the Qur’an on the floor and trampling on them. The blockade and embargo imposed on Palestine, Gaza is becoming more stringent day by day. The Palestinians whose rights, lands, homelands, lives, goods are usurped have been trying to continue their lives under the oppression of Israel for 70 years.

The Palestinians with their women and children continue the “Great March of Return” protests for a month. However, the occupying Israel opens fire and martyrs the journalists who want to make news about the innocent people, children and broadcast the current events to the world. Since the beginning of the events, 48 people were martyred with the bullets and intervention of Israeli soldiers and more than 8 thousand people are wounded.

Against the lawlessness, IHH Humanitarian Relief Foundation, all humanitarian relief associations located in provinces of Turkey and many NGOs protested the steps taken against the Islamic world by issuing a press statement after the Friday prayer all across Turkey. The protest marches starting from Istanbul Fatih Mosque after the Friday prayer, ended in Saraçhane Park. During the protest marches, lovers of Jerusalem shouted slogans “Down with Israel”, “We salute Jerusalem and continue to resist”, “Mavi Marmara is our honor!” 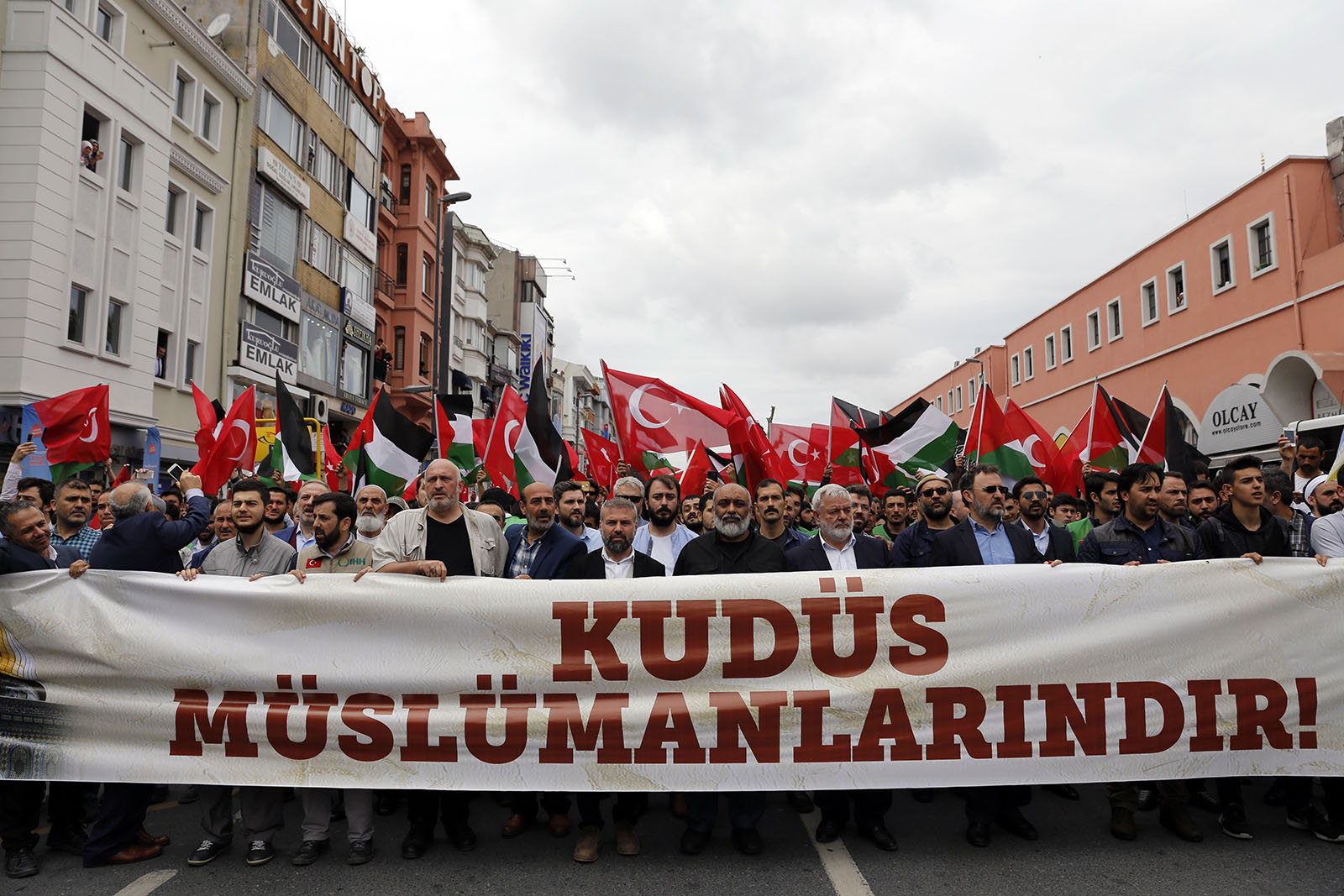 “Palestine is the case of all humanity standing by justice”

The Chairman of the Palestinian Solidarity Association (FIDDER) Ahmet Avde was the first to give the speech in Saraçhane Park. Ahmet Avde started his speech by reading the first verse of Surah Al-Isra.  Avde said as follows:

“Praise be to Allah, who bestowed victory on Muslims and who defeated the tyrants. I begin my speech by telling that may Allah have mercy to the martyrs, our brothers and sisters who martyred while defending Masjid al-Aqsa from where our Prophet Mohammed ascended to the night journey. You have sent a message to the zionist Israel from here. I am sure that all the messages sent from Turkey today have reached Israel. This made Israel understand that the case of Palestine is not only the case of Arabs but also the case of all humanity standing by justice. By moving its embassy to Jerusalem, The USA wants to make Jerusalem the eternal capital of Israel but they will not succeed. Jerusalem will continue to remain as the eternal capital of Palestine forever. If God lets, our marches will continue till we  regain the freedom of Jerusalem”.

After Ahmet Avde, the Chairman of Özgür-Der Rıdvan Kaya took the floor. He used  the expression that those who pay on the path of Allah will never be defeated and said that Israel is trying to capture the souls of Muslims. Kaya's speech was as follows:

“While occupying the Palestinian lands with their weapons, prisons and torture for a hundred years, the zionists also aim to defeat us and give the message that “You are our slaves!”. They are trying to capture our souls. I want to remind you that in the face of this non-stop occupation for 70 years, many generations have passed in the meantime but the Palestinian people never surrendered. Today, 18 year-old Palestinians continue to defend the Palestinian lands that they have never seen at the cost of their lives, even though they have tasted all kinds of persecution. In this process, we could not manage to throw them away from our own lands but also they could not succeed to surrender us. Only the ones who submits to Allah will succeed. Those who pay on the path of Allah will never be defeated. I hope that Allah will show us the days of freedom for the whole Islamic geography. May Allah make fears of zionists permanent.” 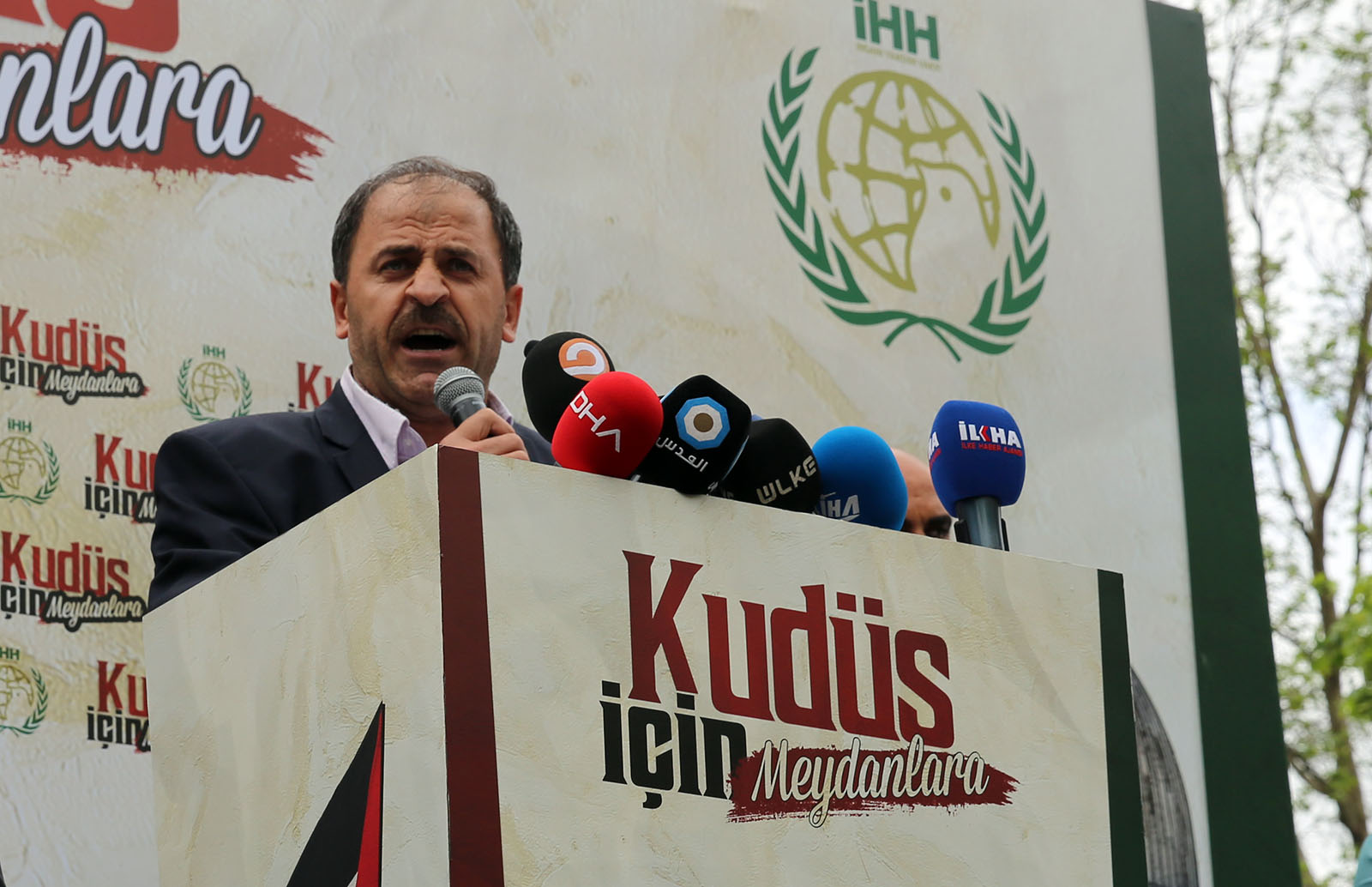 “Zionism will be defeated, Palestine will succeed”

The Istanbul Provincial Chairman of Memur-Sen, Durali Baki also said: “Even though we think differently on many issues, the love for Palestine makes us ummah. It brings us together.” He said that the Palestine reminds Muslims their mission of servitude to Allah and the headlines from his speech were as follows:

“Palestine reminds us our mission of servitude to Allah. It is our responsibility to put Palestine in the first line of our missions. Palestine does not need us, but we need Palestine. The USA, the guardian of Zionism, does not give up its decision despite the reaction of the whole world because the capital of Zionism is not Tel Aviv but Washington. The pirate Israel is the most dangerous terror state of the world. Israel is the racist, fascist and the murderer state. They mostly depend on the silence of the Islamic world. Therefore, martyr Ahmet Yasin was complaining about our silence to Allah. May Allah bless our efforts. The indignation of ummah will be the nightmare of Zionism. As long as we stand against persecution, Palestine will regain its freedom. We shout again : “Down with USA, Long Live Palestinian Resistance! Zionism will be defeated, Palestine will succeed! Imperialism will be defeated, freedom for Masjid Al-Aqsa”

The President of IHH (Humanitarian Relief Foundation), Bülent Yıldırım took the floor for the last speech. Bülent Yıldırım, beginning his speech with thanks to the participants touched on many issues such as ‘One Minute’, Mavi Marmara, moving the embassy and Iran. Yıldırım’s statements were as follows:

“You give support to the marches of our sisters and brothers in Gaza from Istanbul and all across Turkey. The little devil Trump is going to open an embassy in Jerusalem. America was seen as alone in United Nations. Either America stay alone or be backed by the world, we, as Muslims agree that Jerusalem is the capital of Palestine. We are ready to sacrifice our lives to this. On Monday, the opening of the embassy will be held. On Tuesday, our brothers and sisters in Gaza will walk across the border and demolish the walls. Israel says “if you walk I will shoot, I shoot everyone also the children and elders.”

“Look, I am calling from here. Mavi Marmara deal was signed but the embargo was not lifted. Israel did not keep its promise. Israel is a muderer, a lier. Palestinians will march that day and maybe tens of them will be martyred. What is our responsibility? We said ‘One Minute’ ten years before. But now, Turkey has gained strength. Firstly, we demand the cancel of Mavi Marmara deal again because Israel did not keep its promise. We never forgot One Minute but we want also Israel not to forget it."

“There is only one way to do this: the rupture of all relations with Israel and sending the Israel’s embassy and consulate from Turkey. May 31 is the anniversary of the shooting of the Mavi Marmara. Israel thinks that Mavi Marmara was forgotten. We will organize a march in Taksim to show that this is not the case. The slogan for this march will be: Jerusalem is the capital of Muslims!”

“Therefore, you will come there in crowds. Millions of people are gathered in Indonesia and Pakistan to spill out anger against Israel. You will fill Taksim. Israel will not sleep well that night. And lastly, I invite you all to guard against the enemy. They are throwing missiles to the Muslims when you are relax here in Ramadan. Therefore, all of you will be on guard against the enemy. You should take to the streets when you received the call. We know that the cruelty of Israel is responsible for those persecutions from East Turkistan to Arakan.”

“Leave the laziness, stand up, resist and become brothers and sisters!”

“Israel is following us. We are also following Israel. We know what they are doing. We know Israel is a tyrant. We will tell everyone that Israel is a murderer. We know that Israel is the cause of all persecutions in the world. Israel supposes that the people are tired now and will not stand by Jerusalem. If God lets, we will, if necessary, organize the whole world and throw the Zionism out of the Palestinian lands.”

"In the meantime, I am also calling out to Iran. Look how the USA is trying to shoot you. Now, stop being together with the tyrants in Syria. The tyrants come to swallow us. I am calling out to the communities and leaders: Leave the laziness, stand up, resist and be brothers and sisters! Understand the verse of the Qur’an: ’The believers are but brothers’