New home from IHH for Bangladeshi orphans
Teams from IHH Humanitarian Relief Foundation that travelled to Bangladesh on the occasion of Eid al-Adha made the inauguration of the fourth orphanage IHH constructed in the country.
Bangladesh 31.10.2013 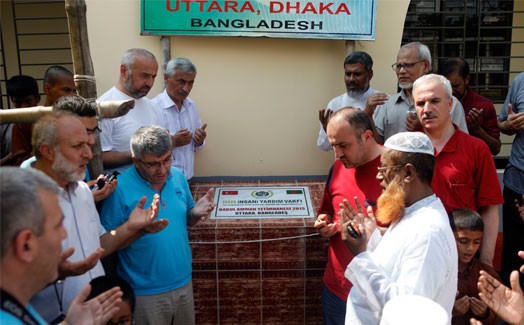 IHH, which carries out relief activities for orphans in regions hit by wars, disasters and poverty, has completed the construction of a new orphanage in Bangladesh where there are more than five million orphans. The entire population of the country is 160 million.

With the inauguration of Babul Amman Orphanage on Eid al-Adha, the number of orphanages IHH constructed in Bangladesh has risen to four.

The orphanage is located in the Islamic Education School education complex in Uttara region of the capital city of Dhaka.

The construction of the fourth orphanage in Bangladesh has been possible thanks to the efforts of the Inshirah Aid Movement. This movement was launched by IHH volunteers who took part in the 5th International Children’s Meeting held with the participation of orphans from 15 countries last year and who were very much touched by the orphans.

Inshirah Aid Movement, which is a good example for voluntary movements and sees coming together around orphans as being one of the most important works of their lives, are making preparations for new projects after establishing a warm house for orphans in Bangladesh.