Omar Mukhtar’s son in Turkey
Mohammed Mukhtar, son of the famous Omar Mukhtar -- a national hero in Libya who organized a two-decade resistance to the Italian colonization of the North African country between the 1910s and the 19
Turkey 13.04.2012 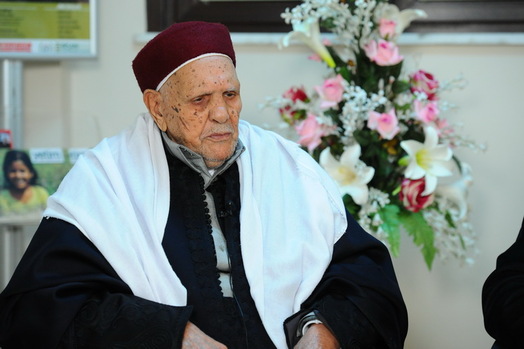 Mukhtar will stay in Turkey for about one week during which he will attend programs in İstanbul, Ankara and Bursa and will have some meetings with state officials.

Mukhtar said the support and assistance of the Turkish people and the IHH to Libya during the revolution in the country will never be forgotten by the Libyans. Mukhtar who has a very sharp memory despite his old age also shared some information about Libya’s history.
‘We will never forget Turkey’s support’
Mukhtar said Gaddafi never cared about the expectations and views of Libyan people but the Libyan people, who took Omar Mukhtar as a model for themselves, toppled the long-standing dictator.

Talking about the legendary resistance of the Libyan people against Italian colonization, Mukhtar also gave some information about the post-Gaddafi era in Libya. He said Muammar Gaddafi ruled the country with an iron fist for long years and he was overthrown by the people of Libya who began a public uprising on Feb. 17 and were determined the take over power from Gaddafi.
Mukhtar said the support and assistance of the Turkish people for Libya during the Libyan revolution will never be forgotten by Libyans.
Mohammed Mukhtar, 90, is the only son of Omar Mukhtar who was executed by Italians.
Visiting the IHH headquarters immediately after landing in İstanbul, Mukhtar offered his thanks to the IHH for its support to Libya during the Libyan revolution.