Calling out to the people of conscience who remain silent against attacks at Aleppo said  a speech IHH president Bülent Yıldırım said “You should lose sleep over Aleppo” in the press conference held for the launching of the campaign.

Syrian Islamic Council among whose members is Association of Syrian Scholars and IHH Humanitarian Relief Foundation organized a press conference in order to voice out their protest against the attacks of Russia and Asad forces against the civilians in Aleppo.

On behalf of the group, Head of Association of Syrian Scholars Council Abdul Kerim Bekkar said in the conference that civilians were bombed in Aleppo violating international laws.

Bekkar said that international community turns a blind eye against the attacks in Aleppo and added "While many world leaders who are so-called friends of Syrian people sign secret agreements Russia, Iran and Asad’s forces continue their heinous attacks at unarmed civilians under siege in Aleppo and other cities. The images of injured or dead children dug up and taken out from under rubble did not move United Nations Security Council to take action to prevent a massacre. Hence we are calling out to all free people and real friends of Syrian people to own up their moral responsibility and to take action to change this shameful situation in Aleppo and other cities.”

Abdul Kerim Bekkar announced that the following days are going to be solidarity days with Aleppo and its residents and invited all imams and preachers in the world to give sermons about it and all Arab and Muslim communities to hold protests in front of Russian and Iranian embassies.

Bekkar shunning Russian and Iranian regime said "We demand them to step forward and admit their crimes. They must be held accountable for the consequences of their actions as they are both occupiers. As for the Assad regime, with God’s help our people will avenge on them.”

IHH president Bülent Yıldırım highlighted that they are unable to deliver relief aid to Aleppo as the world stands by silent against the massacres in Aleppo.

Yıldırım pointed out that "Open the Road to Aleppo" slogan is a shout out to UN and the world.

"People are killed over there. I hope Putin comes to his senses before his visit to Turkey. Russia is increasing its attacks every day. The goal of these attacks is to annihilate Syrian people. They are unplugging the patients in intensive care units because there is no power. The hospitals have become un-operational. Chemical weapons were used four times in three months. Internationally banned weapons are used. Five million people used to live in Aleppo, only 350.000 survived and they are targets of deadly operations now. I would like to invite all mosques in Turkey to hold congregational funeral prayers next Friday for the dead in Aleppo."

“We Should Lose Sleep Over Aleppo”

In his emotional speech the foundation president Yıldırım called out to the Ummah: “Imperialists and Zionists united forces to killed the Muslims in Syria. I am calling out to the people of conscience ‘you should lose sleep over Aleppo! May you not sleep in comfort!’ ”

“I would like to announce here that even if the whole world of evildoers comes together and Syria is left alone we will keep standing by the oppressed. We will soon see how things will turn upside down. I am calling out to all the cities in Turkey to support ‘Open the Road to Aleppo’ campaign, to send out aid convoys, send them to the borders. Then we will do our best to get them across. What I have told applies to all of us. Don’t ever sleep in comfort. I am telling this to Turkish people. When you go to bed every night take Syria to one side and take Palestine to other side. We as a people, as country, as political parties have been powerful as long as we stand with the weak, the oppressed and it will always be so.” 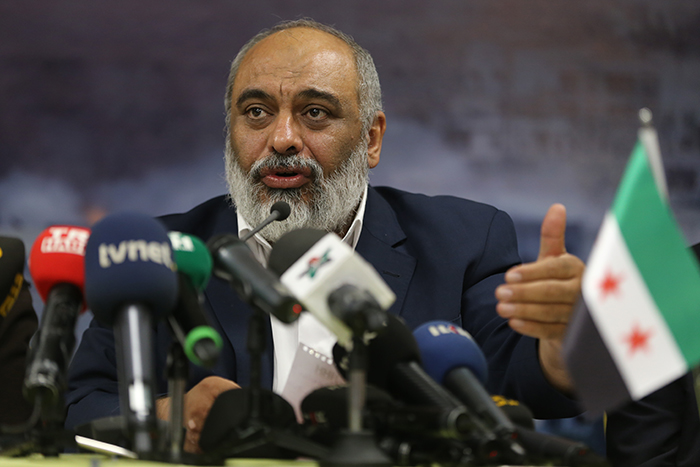 “May Allah Forgive Us”

Upon a question, Yıldırım went on to explain that “Israel’s plan is in action. After Syria the next one is Turkey.”

“After weathering the storm of 15 July we have relaxed. As you know the goal is to divide Iraq and then Turkey after neutralizing Egypt and finally to divide Turkey according to 1982 plan of Israel. It is Turkey’s turn now. If we do not stand upright about Syria we are going to be the next. Therefore we should stand against Russia and America regarding these massacres. And do not forget that Allah’s power is above all powers. If we and you do not advocate the rights of these children Allah will not forgive us in the Day of Judgment. However our people have grown dismissive of these horrors. Let’s imagine our children being killed instead of these children. In brief I find fault in everyone. We have to be on our toes and try everything we can to tell people what’s going on there. May Allah forgive us all.”

For the full text of press release click here.