Pakistanis welcome IHH with great joy
An aid team from the IHH Humanitarian Relief Foundation travelled to Pakistan on the first anniversary of a flood disaster which hit the country in the summer of 2010. During their visit to the county
Pakistan 10.08.2011 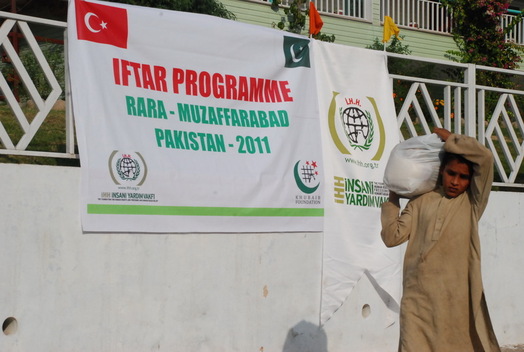 Many agricultural fields were flooded by last year’s disaster in Pakistan where majority of the people earn their living by farming. The country underwent the largest disaster of the past 80 years. The IHH which has been constantly taking relief to the region since the outbreak of the flood disaster sent an aid team to the country on the occasion of the Muslim holy month of Ramadan. The IHH team, comprised of IHH personnel and volunteers, met with the needy families in the region and asked them about their needs. The IHH team also examined the ongoing IHH projects in the region.

The IHH team delivered food packages to the flood victims who reside in the houses constructed by the IHH for needy and disabled people in Islamabad. The IHH team also delivered aid to the people of East Turkistan who settled in the region after fleeing the oppression of China. In addition, the aid team also had a fast-breaking dinner with the Somali students from the Pakistan Islam University.

Visiting the village established for the memory of late Turkish politician Muhsin Yazıcıoğlu and a state hospital which is repaired, the IHH team received information about relief efforts in the region. Members of the IHH team also delivered food packages to the needy people in Nowshera, İslamabad, Khairpur and Muzaffarabad provinces, and examined the projects jointly carried out by the IHH and Khubaib Foundation in Pakistan.

We did not forget the orphans

The IHH which always gives priority to orphans during its relief efforts, visited the orphans in Pakistan, presented them new clothes for Eid and organized an iftar with them at this Ramadan, too. The orphan girls staying at the Msal Orphanage were very happy while receiving their new clothes. The IHH team also visited the Khubaib College and Rara Orphanage in Kashmir-Muzaffarabad and held iftar and sahoor together with the children. IHH team also visited the Haripur College and Orphanage and examined the ongoing construction of a new orphanage in the region.

Conducting relief efforts in Hamzawala and Bakawala towns of Muzaffargarh province, the IHH aid team visited the houses which are constructed by the IHH for the families who lost their houses in the floods. The IHH team, which included volunteers from labor union administrators and businessmen who wanted to examine ongoing projects for flood victims in the country were welcomed with a great joy wherever they went.

Our volunteers who went to Pakistan one year after the flood disaster examined most of the projects launched by the IHH there. The IHH which always extends a helping hand to our brothers and sisters in Pakistan by constructing schools, mosques, madrasah, installing water purification systems, taking healthcare services, launching projects for orphans, delivering aid during Eid al-Fitr and Eid al-Adha, put a smile on the faces of the people in need on the first anniversary of the flood disaster. Spending a full week with the flood victims and orphans, the IHH team members returned to Turkey with the prayers and greetings from Pakistani sisters and brothers.