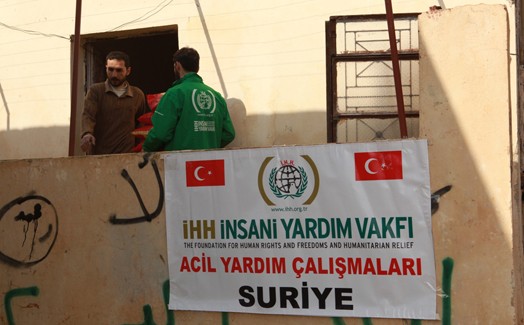 IHH has taken 5 tons of flour, 3,5 tons of pasta, 1,5 tons of bulgur, 450 kilograms of rice, blankets and winter clothes to the region.

A total of 30000 people have left the region due to heavy clashes that have taken place in the military airport close to Taftanaz Idlib and its surroundings over the past 13 days.

It is nearly impossible to find an undamaged building in the populous city where bombardments continue both from land and air.

Only 500 people stayed in the town with 30000 inhabitants

People who had to flee their homes due to the attacks had to take shelter in tents or safer areas close to .

Teams from IHH’s Hatay desk have taken aid to the innocent Syrians who could not leave the region due to lack of means to do so.

IHH teams also witnessed the bombardments as they were in the region for relief work.

Staying in the region for three days IHH teams witnessed the bombardments for many times. Houses owned by civilians were also hit by military warplanes which bombed the region randomly. The fact that houses had been evacuated in a village close to Taftanaz prevented a disaster.

Shortage of bread clean water and food supplies is a big problem for innocent people who try to survive under bombardments.

Children grow up under bombardments

Innocent Syrian children who live in towns try to survive from cluster bombs hurled from warplanes and mortar attacks from the land.

Attacks from Assad’s soldiers never ceased during the time IHH teams stayed in Taftanaz. While warplanes and helicopters carry out attacks during daytime sounds of tanks and mortars never cease at nights.

The only thing villagers to whom IHH has taken various aid supplies want is to live in somewhere with their children away from the sounds of the bombs.

Delal a three-year girl who lives in a Syrian village says: “Bashar kills babies. My friends with whom I used to play were killed by his planes. Perhaps he will kill me too.” Delal’s remarks reveal the effects of the war on children once again.