The 11th anniversary of the US invasion of ‪‎Iraq‬
Close to a million people lost their lives, and five million children were left orphaned after the Iraq invasion.
Iraq 20.03.2014 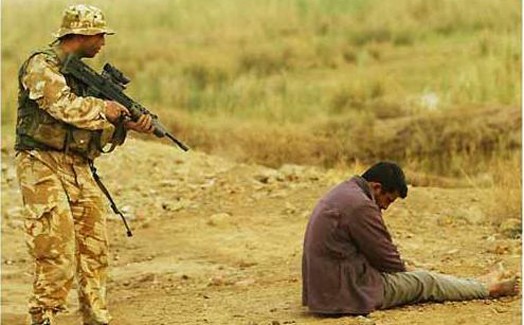 After the attacks on 9/11 on the twin towers, the USA along with the UK launched the campaign that became known as the “War on Terror”. Within this plan, they invaded Afghanistan to depose the Taliban. Immediatley afterwards their new target was established: Iraq.

The US President at that time, George W. Bush,  accused Iraq of holding chemical weapons and requested the United Nations deploy a team of inspectors. Even though Iraq denied this they accepted the weapons inspector teams. The team then concluded that Iraq did not hold any chemicals weapons in their factories.

Despite this conclusion, on the 20th March 2003, the US invaded Iraq. Attacking from air and land forn 44 days, the US President announced the end of the attack on the 3rd May 2003. Close to a million people lost their lives, and five million children were left orphaned, with hundreds of thousands of civilians becoming refugees. In the end, the push for weapons of mass destruction was acknowledged by the US administrators as baseless and unwarranted.
Related news
See all
IHH Opened the Cihangir Mosque in Syria
IHH Humanitarian Relief Foundation constructed a mosque in the Aktarin town, north Syria.
02.06.2022
Ibrahim’s first steps
The dream of 6-year old Ibrahim Tüser, who is supported under IHH’s Orphan Sponsorship System, to be able to walk, came true with the support of donors.
Bitlis, Orphan
29.03.2021
Pedaling for orphans
IHH Malatya volunteer Ihsan Kılıç will be visiting 13 cities, cycling from Malatya and travelling a total of 500 km to raise “Orphan Awareness.”
Malatya, Orphan
23.09.2020