Thousands of greetings from Turkey to Syrian resistance which turns third year
Thousands of people have taken to the streets in Turkey in order to protest Syrian President Bashar al-Assad and Baath Regime on the third anniversary of the beginning of Syrian resistance.
Syria, Turkey 20.03.2013 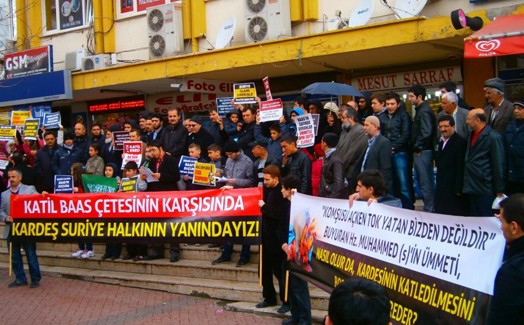 It has been three years since the start of the public unrest in Syria when a group of students in the southern city of Daraa scribbled graffiti criticizing al-Assad on 15 March 2011. The students were detained and the unrest spread across the country.

On the third anniversary of the resistance, many demonstrations, marches and news conferences have been held in Turkey in a show of support for Syrian people.

The Platform for Solidarity with the Syrian People (SHDP), to which IHH Humanitarian Relief Foundation is a member, has announced that it will organize various events in 34 provinces on the occasion of “Week of Solidarity with Syrian People” to mark the third anniversary of Syrian resistance.