Thousands of People Took the Streets for Palestine
Pro-Jerusalem Muslims from all around the country convened at the squares of the city in order not to remain silent about Zionists’ and imperialists’ plans on Al-Quds. The merging point of the protesters in Istanbul was Fatih Mosque.
Palestine 08.12.2017

IHH Humanitarian Relief Foundation, humanitarian associations from all cities of Anatolia and Memur-Sen, gathered with “Quds Friday” name and has issued a press release to protest steps of USA administration to recognize Jerusalem as the capital of Israel.

The merging point of Istanbul protest was Fatih Mosque. After the Friday Prayer at the Fatih Mosque, thousands of Quds protagonists marched to Sarachane Park. During the march, the rage against Israel and USA has been uttered as slogans chanted. Leaders of civil society organization and politicians have bespoken to the crowds who met in Sarachane Park.

“Tyrants won’t go down just because we said so”

The first spokesman to go up to rostrum was the head of Umran Research Center; Semsettin Ozdemir for the name of Istanbul Platform. Ozdemir said, “We have lost Andalusia and Ottoman Empire because of internal conflicts of Muslims”. Here are Ozdemir’s statements:

“While going through rough days, our agony grows apace day by day. The latest ordinance aims to promulgate previous ones. With the ordinance that even shocks the devil, Al-Quds is desired to turn into the center of Zionists. It is more’s the pity Syria and Palestine are devastated today, as we couldn’t foresee the open war declaration. Tyrants won’t do gown just because we said so. We have lost Andalusia and Ottoman Empire because of our internal conflicts. We should keep in mind to empower cement while we maledict to Israel and United States of America.”

“We need to be constantly hyper-vigilant”

“We are under attack in every field nowadays. The ordinance that made by Donald Trump, President of USA is a disgraceful and a piece of rag paper for us. Al-Quds is crucial and we have to lay claim to it. Politics of United States is clear: producing chaos to maintain its potency. Quds is the capital of independent State of Palestine. Every statement behalf of Quds is valuable. However, it’s not sufficient. So, we have to be constantly hyper-vigilant and prompt 15 July spirit. This issue is not peculiar to the Muslim world. If Quds falls, capital cities of the world will be restless. Quds is Muslim’s to safe keep and today we are ought to stake out our claim on Quds.”

Beginning his words with asking “Are we ready to go Quds, walk for days and give up our lives if we have to?” IHH Chairman Bulent Yildirim, qualified Trump’s decision “unwisely” and continued:

For years, we couldn’t convince the Muslim World that the USA is the “Great Devil”. I would like to thank Trump as he has burst this truth to the world. Who are you to threaten the Islamic World! You are a turkey shoot for that Islamic World! Trump made this decision with a goofy impulse as if everyone wants to see Jerusalem as the capital of Israel.

When the matter is Al-Quds, all CSO’s united. You’ll see the foundation process of Islamic Union will accelerate after Trump’s unwisely signature append. Because all children, teens, women are rising for Quds.

The deceased Muhsin Yazicioglu visited IHH in 2002 when Cenin Massacre happened. You know what he said? He said, “Turkish army should fight with Israel in Palestine if necessary”.

Israel assembled a meeting under the dome of Al-Aqsa Mescid and Netanyahu declared “we will make Jerusalem our capital utterly in 2020”. Quds means Istanbul. Al-Aqsa Mosque paces with Haghia Sofia. Plea of Istanbul begins now on, today. My mentor, Deceased Necmettin Erbakan elucidated Zionism for 30 years. And then, the day came, “one minute” spat out to Zionism and Mavi Marmara martyrs began to walk out. Now, we hear the footsteps of Islamic Union. We’ll continue our march till we pray in Al-Aqsa Mescid. Representatives of all political parties are here today. If we can unite, ordinances of Trump administration will be invalid.

“If you want to, you can always give lands of America to Zionists.”

“Set away accepting Quds as the capital of Israel; we don’t even recognize Tel Aviv as a capital or Israel as a legitimate state. This matter is not like any others. This is a matter of faith. Who are you? You will shove off from those lands. I’ll put it in Erbakan Hodja’s words, ‘If you want to, you can always give lands of America to Zionists.’ We are yearning for propitious ordinances from Organization of Islamic Cooperation.”

“End all sort of collaborations with Israel”

“We leave our political conflictions aside when it comes to the Islamic community. Here, we are on the streets just as at 15 July. Yes, we’ve damned USA and Israel more than many times. But we now know it is not destroying them. The other day our president said, “Quds is our red line”. Here, I want to call out to all government authorities saying:

-Terminate all kind of collaborations with Israel at once. Shot down all embassies of Zionist Israel and enunciate the consul persona non grata.”

“Actually we’ve ensured the current situation of Palestine. The discussion we have collapsed into caused bleed and tear of Islamic states. The main obstacle is exactly this, it militates against our unity. Let the Allah damn whoever stands against Islamic unity, myself included.''

“We have to pull ourselves together”

Head of the Istanbul Province of The Felicity Party (Saadet Partisi) Abdullah Sevim:

“Quds will never be the capital of Israel of course. But we have to be patient and pull ourselves together for that. Allah recommends us devotion and piousness for that.''

“If Al-Quds falls, Mecca and Medina will fall”

We don’t recognize the void resolution that president of the United States declared. We damn that resolution. The Muslim community of the world is going to throw up to that ordinance. We are shouting out from here: know these you tyrants, Quds is not the name of any city for us. Quds is sentimental for us. Quds is the capital and the center of humanity. That is the mother of the lands and our first kiblah, destination. If Quds falls, Mecca and Medina will fall. Holding Quds means holding Sarajevo and Istanbul. 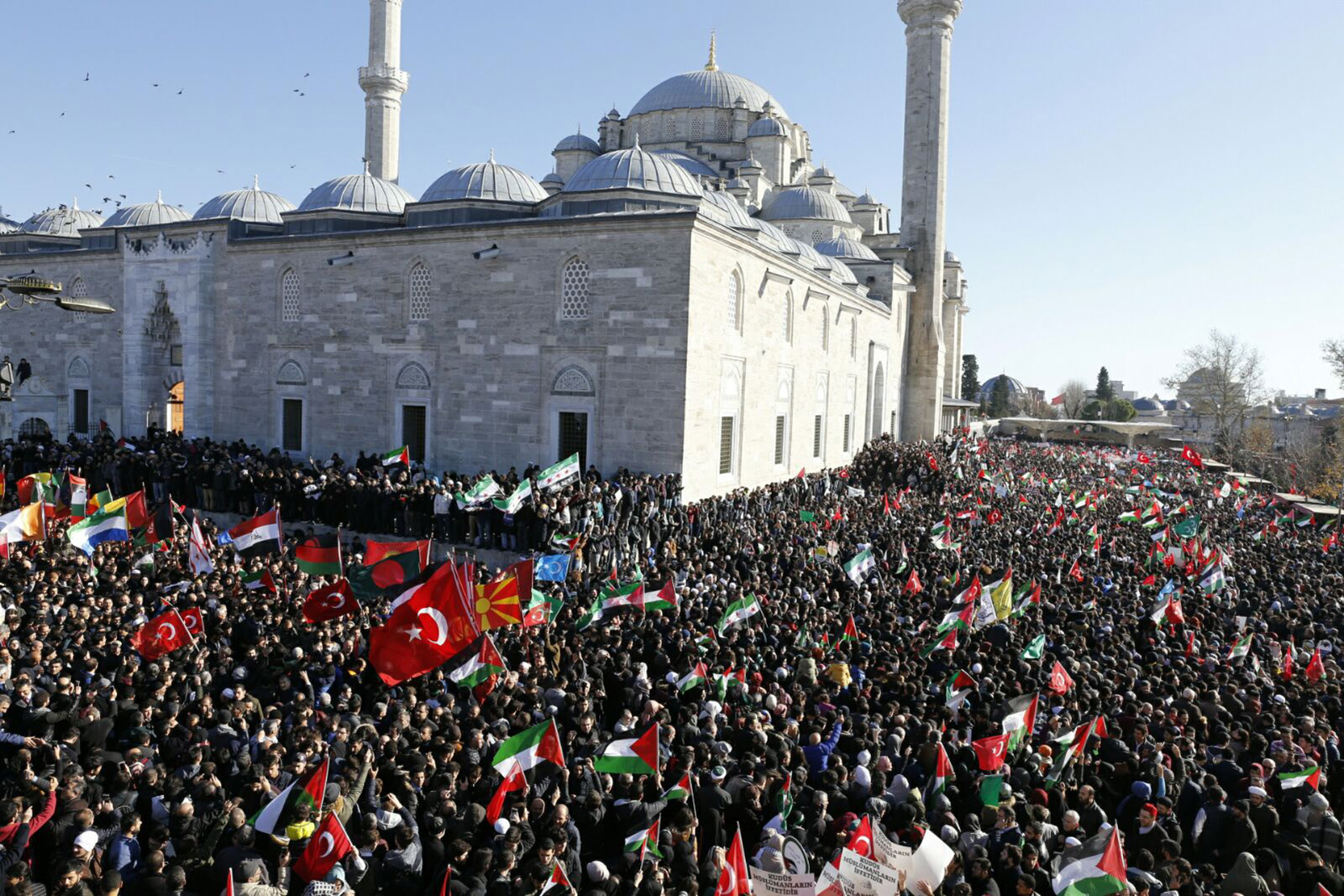