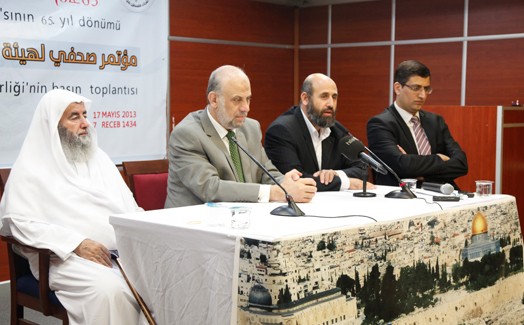 The council members said: “The issue of Syria is the same as the issue of Palestine for us,” and they called on all Muslims to extend a helping hand to Syria. The scholars said they paid visits to the Syrian refugee camps and told Syrians to act in solidarity.

With regards to Syrian President Bashar al-Assad, the scholars said they will never support a tyrant even if he supported Hamas.

The scholars also voiced their concerns about projects seeking to share out Masjid al-Aqsa between Muslims and Jews, adding that they are completely against such moves.

The press release which was read out by secretary-general Nawaf Takruri on behalf of the Council of Palestinian Scholars Abroad said:

-Without a distinction based on 1948 and 1967 borders, al-Quds, Masjid al-Aqsa and all the Palestinian lands are the lands of Islam and it is impossible to give up even one span of these lands.

-We see the exchange of lands as proposed by Arab Ministerial Council as a concession and reject it. We don’t think individuals, groups or parties that give up from the Palestinian cause represent Muslim Ummah or Arabic peoples.

-We think there is need for jihad in order to save all the occupied land of Palestine.

- We thank Turkey and its people for the support they have given to Palestinian cause. We congratulate Prime Minister Recep Tayyip Erdoğan for insisting on receiving an apology from the Zionists [for their attack on Mavi Marmara]. We also commemorate the Mavi Marmara incident with respect, which became the concrete sign of Turkish government’s and people’s support for Palestine.

With regards to the Syrian crisis, majority of the world is silent about the tragedy there while the rest is supporting the tyrannies in Syria. In this regard, as the council, we would like to note the following issues:

-We congratulate the heroic people of Syria for showing resistance to unprecedented tyranny.

-We condemn the attacks carried against Palestinians staying in refugee camps in Syria, sectarian killings that serve for the interests of the Zionist project and the bombings in Reyhanlı which claimed the lives of dozens of Turkish and Syrian people.

-We think it is a fundamental right for everyone to protect their lives, honor and freedom.

-We condemn the attacks of Zionist occupiers on Syrian soil.

-We are trying to ensure that international organizations and refugee commissions provide the necessary support for the Syrian refugees.

-We also congratulate Iraqi Council of Scholars that has made efforts for the elimination of the tyrannies faced by Iraqi people.