Fundraising Event for Gaza in Sivas
In Sivas, a prominent city in Eastern Turkey, volunteers of IHH (The Foundation for Human Rights and Freedoms and Humanitarian Reliefganized a night reception of support for Gaza cause. Bulent Yildiri
Palestine, MiddleEast, Turkey 10.04.2010 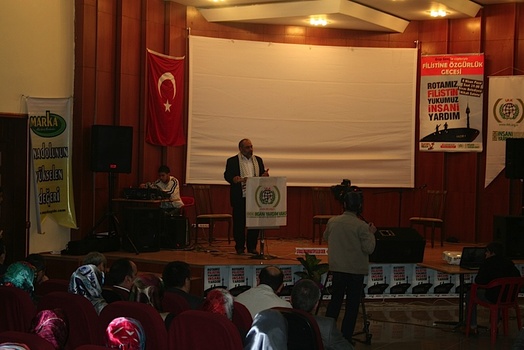 In order to give their support, NGOs gave a reception for Palestine’s benefit. Hosted in Municipality’s Reception Hall, on this past Sunday, IHH’s General President Bulent Yildirim, representatives of political parties and those of NGOs’ in addition to numerous local individuals who support the cause also attended the event.

“We purchased two ships which will sail to Gaza. Five other ships are on their way from European countries. People and activists of different religions support this campaign. Therefore, we are supposed to be more active in supporting this campaign as Muslims. Thanks to the embargo, noone was able to send anything to the people of Palestine. Following our breakthough the land, now we have decided to break the embargo by the sea as well. Whole humanity is gathering in this flotilla. Our conscience is coming together. People of Palestine is waiting for our help. Their resistance is not only for themselves but also for Masjed al-Aqsa and Jerusalem. Thus, they are standing out for the dignity of all Muslims. We owe them a lot. If not for their resistance, Gaza would have gone already long time ago. Now it would be other Muslim countries’ turn.” said Bulent Yildirim.

A concert by Grup Genc (The Young) followed the speeches, at the reception. An auction was held the next, where two scarves signed by the Palestinian Prime Minister was sold. Businessmen Sadi Kotan and H. Ibrahim Karademir bought the scarves for 1500 and 1000 Turkish Liras. The funds gathered by the auction was handed over to IHH in order to be transfered to the people of Palestine.