IHH Aid to Refugees in Syria and Lebanon
IHH(The Foundation for Human Rights and Freedoms and Humanitarian Relief), provided clothing aid to the Palestinian families struggling to survive in refugee camps in Syria and Lebanon. Also, statione
Lubnan, MiddleEast, Syria 05.04.2010 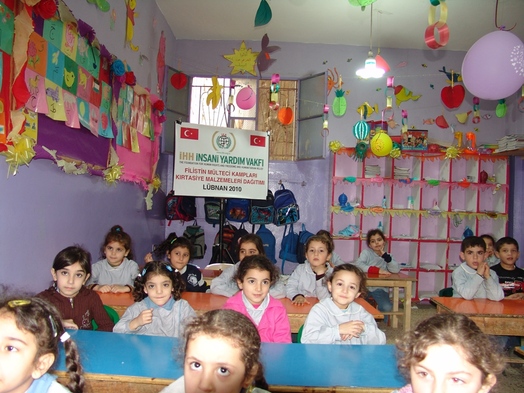 In 1948, millions of Palestinians found themselves as refugees, due to invasion of their homeland by Israel. Palestinians seeked asylum in Syria, Lebanon, Jordan and Iraq. However, taking refuge in another country did not solve the sheltering problem that Palestinians face. Asylum seekers are struggling to survive in their new lands deprived of most of their civil rights. 500.000 Palestinians, in ten camps, are living as refugees in Syria. These second and third generation Palestinians were born and raised in camps and they have never seen their homeland, not even once. There are 12 refugee camps in Lebanon that accommodate around 400.000 Palestinian refugees. Living conditions in those camps are far from being humane. Palestinians are banned from earning their bread and butter in 72 different job positions. Majority of those people are living under poverty threshold.

IHH is working on aid projects in refugee camps of both Lebanon and Syria regularly. Yermuk, Han Dennun, Speyna and Dar’a camps in Syria and Beddani, Burj al Berejna, Shatilla, Nahr Al Barid, Marilyas in Lebanon have been delivered aid by the Foundation recently. While the schools that orphans attend in refugee camps of Lebanon were provided with stationery items, those families in need were also given food and clothing. Also, certain establishments received donations. In camps of Syria, schools where handicapped and orphaned students were educated received stationery goods. As a means of support, furniture items were given out to newly-weds in refugee camps.