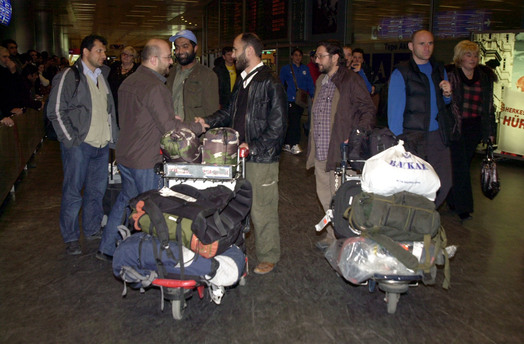 The six aid workers sent by the IHH Humanitarian Relief Foundation to Haiti after the 7.0-magnitude earthquake have returned to Turkey. The aid workers stayed 10 days in Haiti.

Recep Güzel, one of the aid workers, said “A heartbreaking humanitarian tragedy is unfolding in Haiti. The affected people might have to live with the trauma for years. People were unable to recover because of deep poverty. The earthquake has made Haiti the poorest country in the world.”

“I was particularly moved by orphan children who had lost either of their parents in the earthquake. We made an application to bring 10 Haitian orphans to Turkey; however, the Haitian government banned taking orphans out of Haiti after attempts by Western aid agencies to smuggle orphans out of the country. We would like to return with several orphans. If the Haitian government grants permit, we will bring the orphans to Istanbul,” said Mustafa Öztürk.

Ali Alemdar, Girani Yavuz and Ali Yalçın, physicians on the IHH team, spoke about their observations. “We mostly treated women and children in Haiti. The situation is deplorable. The number of people we treated was 200 a day. We worked in coordination with the Haitian Health Ministry. Epidemics had started to break out among children. Earthquake survivors are striving to live in unhealthy conditions. There were still bodies in streets. The dead bodies pose a fatal risk to the local people,” they said.

Zekat Foundation, a partner organization of the IHH, will carry on aid works in Haiti.