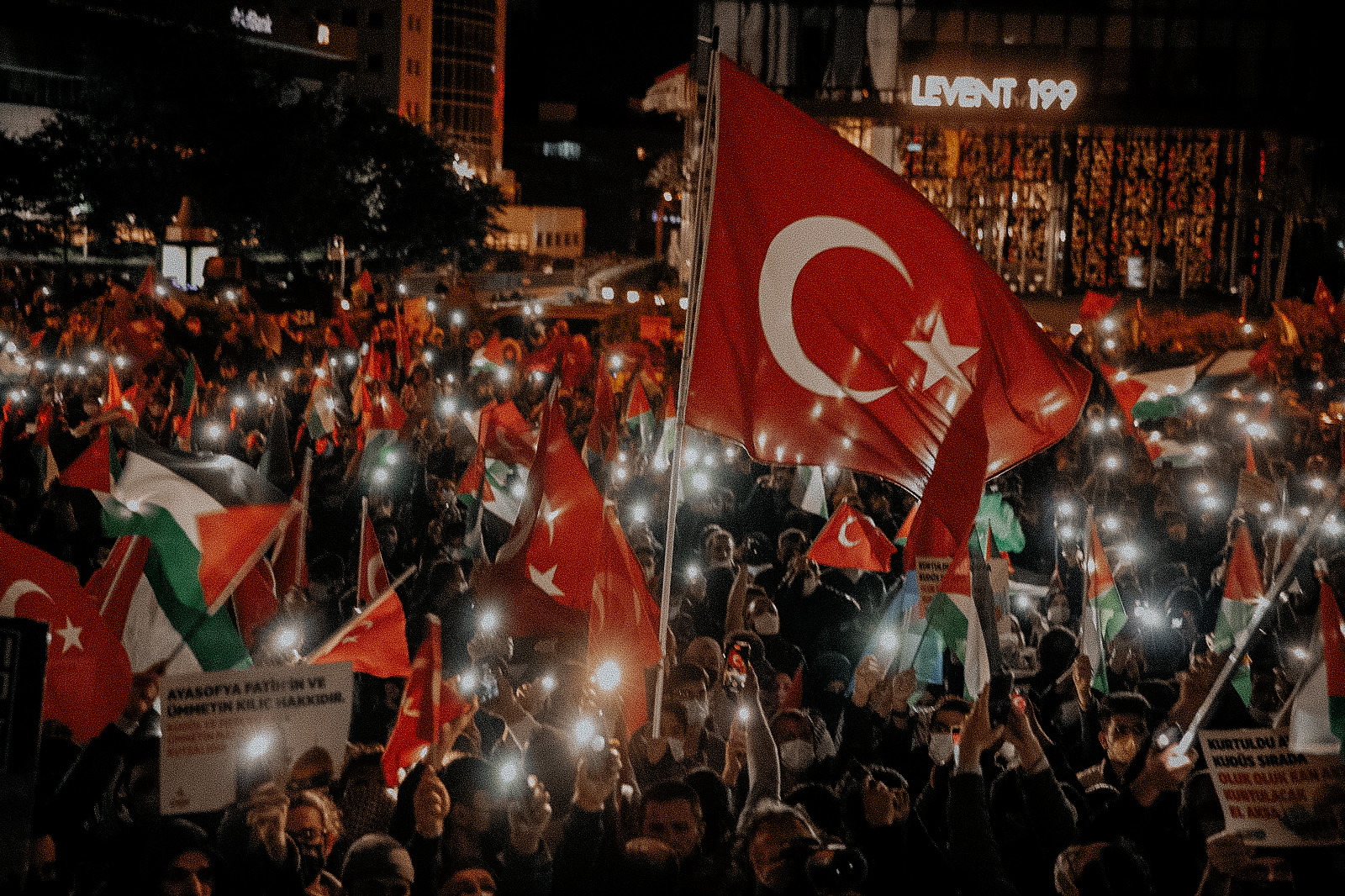 Protesters carrying Turkish, Palestinian and East Turkistan flags at the second demonstration staged in front of the Israeli Consulate in Istanbul chanted the slogans “Mavi Marmara is our honor”, “Murderer Israel, get out of Palestine”, “Masjid al-Aqsa is our honor.”

“We will stage such a protest, everyone will see this!”

IHH Chairman Bülent Yıldırım addressed the protestors in front of the Israeli consulate. Reminding them of President Recep Tayyip Erdoğan’s “One Minute” reaction and the raid on the Mavi Marmara, Yıldırım said “Some Turkish people supported Israel in the “Six Day War.” We were deceived at the time. But now, all Turkish people are supporting Palestine. The reason for this is these attacks by the Israeli forces. Our people have woken up; they are aware of everything. The lion has awakened. Netanyahu, hear these voices!” Yıldırım, who said they would act with patience and discipline, said the course of the demonstrations would be determined according to the events taking place in Palestine. Explaining that the Zionists planned to attack Masjid al-Aqsa between 09.00-11.00 in the morning, Yıldırım continued his speech:

“They have seen our determination. If they plan to attack Masjid al-Aqsa, then we will call you to come here again. This time, we will hold an even larger protest. Everyone will see what kind of protest it would be. They know all too well that we do not speak in vain. Remember, Israel has tested the world. As a result of this test, they suspended the decision in Sheikh Jarrah neighborhood for one month. During this month, they are expecting the tension in Turkey to scale down. But how could they really imagine that the tension in Turkey would decrease? The whole world is saying, “Al-Quds is our red line.” Do you know what a red line is? Red is blood. We are saying, “We have marked the freedom of Al-Quds with our blood. We will never submit Al-Quds to the Zionists. We will lose our lives, but don’t think we are satisfied with death alone. We will place our foreheads in Masjid al-Aqsa in prostration. Only then will we submit our souls. But you will not be there to witness our prostrations. You will be driven out! Al-Quds is the capital of the Muslims. It is the city of peace.” 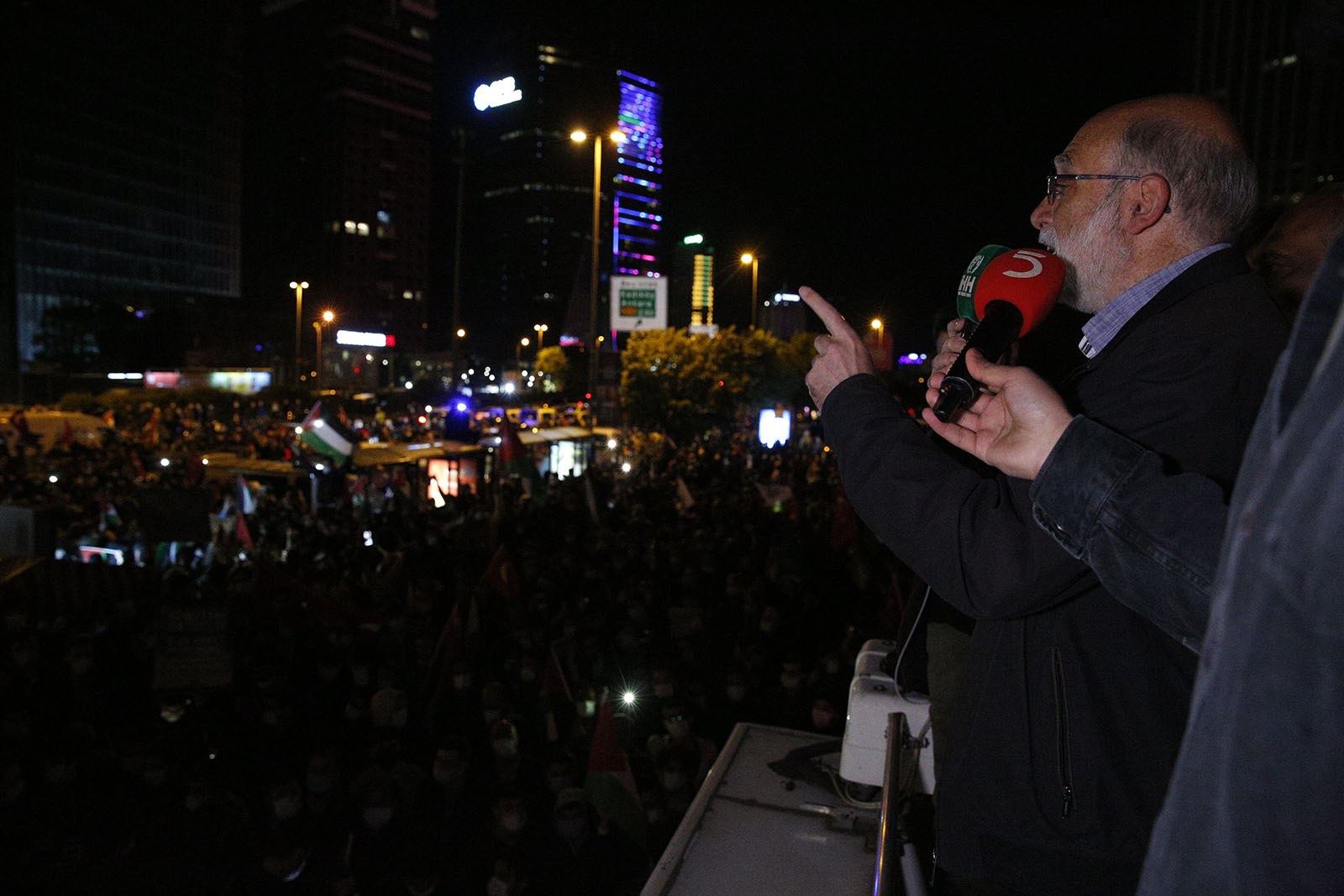 “The powers believed to be invincible will be defeated”

In his speech, Özgür-Der Chairman Rıdvan Kaya said it is wrong to simply to see the scenes of oppression when we look at Palestine. “At the same time, there is a resistance that is the pride of humanity and the Muslim community, and where there is resistance there is hope. As these innocent people continue to stand up in resistance, the powers that are believed to be invincible will be defeated and perish. Just as we have seen these oppressors being repelled until today in the various townships of the Muslim community despite all their claims of power, invincibility and superiority, we believe that our Lord will show us the Zionists drowning in their own oppression.”

“After the Ottomans, blood and tears took over Al-Quds”

Turkey Youth Foundation (TÜGVA) Chairman Enes Eminoğlu reminded the protesters that Al-Quds was a city of peace and harmony while under Ottoman rule. “When the Ottomans withdrew from these territories the British came; blood and tears have not left these lands for 100 years.” In his speech, Eminoğlu reminded us of the words of Palestinian Musa Hijaz “When you hold these meetings in Istanbul and Ankara, the hearts of the Zionists tremble. We are here today and we will be here tomorrow.” Ömer Karaoğlu said, “Even if they chain the mountains, they will never be able to extinguish the light of Allah, they will never succeed in making us divert from our cause; we will never give up.”

“Al-Quds is not just an Arab issue”

Pointing out that Al-Quds is not simply a geographical issue, Chairman of the Anadolu Youth Association Istanbul Branch Yunus Genç said Masjid al-Aqsa is an issue of belief. Genç said: