Mavi Marmara returned home
Mavi Marmara ship returned to İstanbul on Sunday 219 days after it had departed from the city to deliver humanitarian aid to Gaza. It was received by thousands of people at the Sarayburnu Port of İsta
Palestine, Turkey 26.12.2010

The ship was sent to Gaza on May 22 but stopped by a bloody Israeli attack in international waters on May 31.

Fireworks greeted the ship as it entered the waters of the Bosporus. As the ship approached the port, 80 small boats moved to welcome it. People carrying Turkish and Palestinian flags welcomed the ship joyfully in Sarayburnu. It was like everywhere was dyed with the colors of the Palestinian flag. Many people had difficulty to hold back their tears as the ship approached the port. Maritime police took tight security measures in the area. National swimmer Alper Sunaçoğlu jumped the sea from Sarayburnu and welcomed the ship in the sea. Mavi Marmara was towed at the Sarayburnu Port at 1 pm.

The posters of the nine peace activists killed by Israel hung from the ship. Palestinian music that was performed on the stage made the crowd undergo emotional moments. The people in Sarayburnu underwent moments of both joy and sorrow. Mavi Marmara’s returning to İstanbul, leaving nine martyrs behind, was the main reason behind their sorrow.

In addition to Turks, there were hundreds of activists from across 50 countries at the reception ceremony. Captain Mahmut Tural and his crew brought the ship back to İstanbul. The same crew members were at the helm of the ship in its voyage to Gaza.

Families of the martyrs got on the ship for a visit after it was towed at the port.

The crowd watched the program from giant screens. At the ceremony, anthems and songs which call for freedom for Palestine were played. People chanted anti-Israeli slogans and carried banners that protest Israeli blockade of Gaza. The scene at the reception ceremony revealed how sensitive the Turkish nation is about the Mavi Marmara case and the plight of the Palestinian people.

In his speech, Yıldırım said: “Those who direct accusations at us will be ashamed of themselves after seeing this crowd. We began our journey to take humanitarian aid to Gaza. Our brothers became martyrs for the sake of this goal. If there is one that needs to be questioned, it is Israel. Some criticize us for resisting against the Israeli soldiers. What should we have done? Should we have remained silent before a burglar that broke into our house? Are you doing nothing to a burglar that broke into your house?”

Thanking everyone who supported the aid flotilla, Yıldırım said there were plans to send a new flotilla to Gaza. “Israel says, ‘Stay away from us, and leave us alone.’ We ask it to stay away from Palestine so that we can stay away from it. As long as Israel continues its blockade of Gaza, we will set sail to Gaza with new ships.”

Speaking on behalf of the families of the Mavi Marmara martyrs, Doğan delivered an emotional speech and said: “Our Mavi Marmara returned home. Our pain is great. May Allah give us patience. This a very different feeling, which is hard to explain in words. As martyr families, we feel the legacy of our martyrs more intensely as time goes by.”

Doğan said although martyr families wanted to board the Mavi Marmara ship from Kepez  Port in Çanakkale, officials prevented them from doing so due to some reasons. “We were kept waiting at the port for hours. Then, we were not allowed to board the ship. This hurt us deeply. This voyage was of crucial importance for us. I refer those who did not take us to the ship to Allah.”

Other speakers also said new aid flotillas will set sail for Gaza and no backward step will be taken to this effect.

The ship, which will stay docket in İstanbul's Sarayburnu Port for one week, will be open to visits during this period. It will then be sent to the Tuzla shipyard for further repairs. Upon demand, the ship will also be sent to other countries with an aim to keep the blockade on Gaza on the world’s agenda. 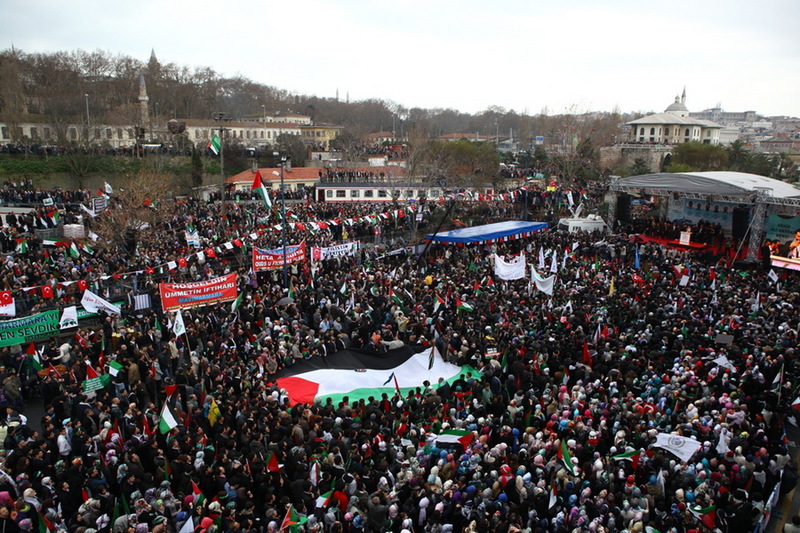 Mavi Marmara was on its way to Gaza on humanity’s behalf when it was attacked. There were 578 peaceful activists from 37 countries on the board the ship. There were six ships in the flotilla. In order to heal the wounds of Palestinians who live under Israeli blockade, the ships were carrying humanitarian aid materials, medication, medical supplies, cement, iron, children park equipments and  prefabricated homes, things Gaza was in desperate need of.

However, Israel stopped the ship brutally despite its humanitarian goals. Attacking the Mavi Marmara ship in international waters on 31 May 2010, Israeli commandoes martyred nine peace activists and injured 54 others. Seizing the ships, Israel treated the activists as if they were terrorists. After they were handcuffed, the peace activists were taken to Israel’s Ashdod Port where they were interrogated for hours. The activists were subjected to Israel’s physical and psychological torture. The ships were sent back to Turkey on 7 August 2010. During the period Israel kept Mavi Marmara, it tried to remove the traces of its brutality on the ship. Israel seized all the photos and footage taken by activists and press members on board the ship. Israel has hidden all the evidence from the eyes of the world. Israel has neither offered an apology nor paid any compensation for the attack.