People Rave About Qaradawi’s Book: Jerusalem
8.000 copies of Yusuf Al-Qaradawi’s book, Jerusalem, have been sold in Sanliurfa, soon after its launch. Funds raised through the book sale have been donated to IHH (The Foundation For Human Rights An
Palestine, MiddleEast, Turkey 30.04.2010 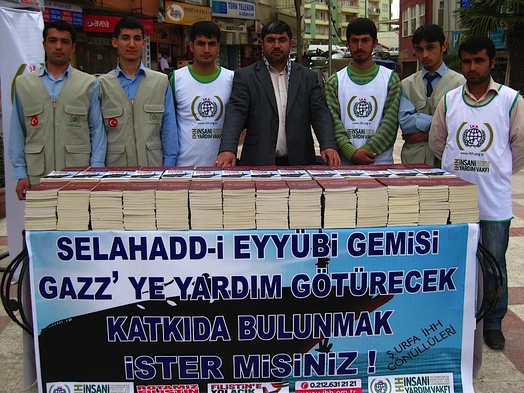 Sanliurfa is a city that is believed to be the birthplace of prophet Abraham (p.b.u.h.). In Sanliurfa, a book stall have been set up outside the famous Pool of Sacred Fish where Abraham (p.b.u.h.) was thrown into the fire by Nimrod. Well-known scholar of Islam Yusuf Al-Qaradawi’s book, “Jerusalem”, is being sold for 5 Turkish Liras (equals to USD 3,50) per copy. 8.000 copies of the book were sold so far.  A total number of 15.000 copies are aimed to be sold by the time the flotilla sets sail.

IHH volunteers in Gaza are working their best to support the aid flotilla to Gaza. Behcet Atilla, on behalf of volunteers, noted that they are working to organize several events including conferences, seminars and exhibitions to show their support to “Palestine Our Route, Humanitarian Aid Our Load” campaign. Atilla mentioned that they aim at raising funds also through the above-mentioned book sale. Another event, a food fair, is planned to be held in Sanliurfa on the coming days.