Witness accounts of the Israeli attack and rights violations
Mavi Marmara trial which began to be heard on Nov. 6 has been adjourned to Feb. 21
Palestine, MiddleEast, Turkey 09.11.2012 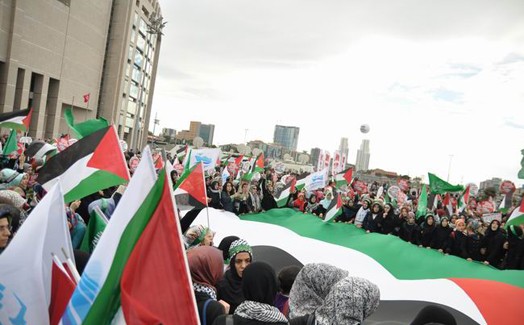 The suspects were not in attendance at the third hearing of the case at the İstanbul 7th High Criminal Court at İstanbul Courthouse in Çağlayan. Lawyers of some victims and co-plaintiffs attended the hearing in which the suspects were represented by a lawyer appointed by the İstanbul Bar Association.

During the hearing, the victims, victims’ families, relatives of the martyrs described the attack and the rights violations after the attack.

Murat Atmaca: They [Israeli soldiers] tried the retrieve the bullets from the bodies of injured people themselves. They did not even give water to us for a long while. Prison wardens were making noise by hitting on the door just when we were about to sleep, they did this for many times. We spent three nights and two days in prison under very poor circumstances.

Abdülhat Abdurrahman: They took our photos, they took our fingerprints. They forced us to sign papers.

Şahin Özdemir: They opened fire on those aboard the ship by first hurling smoke bombs and sound bombs. When the Israeli siege was completed, six of the wounded were killed. All the friends were interrogated by Jewish citizens coming from Turkey.

Doğan Özlük: We set sail to take 300 letters written by children in Tokat for their brothers and sisters in Gaza. Plastic bullets seem very innocent but Cengiz Songür, one of the peace activists, was killed only by one plastic bullet.

Sami Emin: There were soldiers everywhere. With handcuffed hands, we were made to pass from the middle of the people who gathered in Ashdod Port.

Martyr Fahri Yaldız’ mother Zeliha Yaldız: My son lost his father at the age of eight. I raised my children alone. Fahri went there to help orphans. I will not give up from my cause. I hope they will live through the same pain I had.

Yaldız’s wife Yeter Yaldız: I am left with my four children alone. We are suffering from constant pain.

“I am now left with my four children alone. We are psychologically devastated. We could not still come over his loss, we are still suffering from constant pain. My husband lost his life only due to his compassion. He just went there to see the joy in the eyes of Palestinian children. He used to tell me, ‘An Israeli child might have also undergone this.’ We never want special days to come because my children feel the absence of their father more in those days,” he said.

In further remarks, the woman said: “Since he grew up as an orphan, he wanted to go there in order to help Palestinian children. We did not raise any objections to him. Whenever my children say, ‘father,’ I feel heartbroken. I have complaints about the suspects and want to join the trial.”

Derya Kılıçlar: I lost most part of my life

Derya Kılıçlar who lost her husband Cevdet in the Israeli attack said he used to work as a journalist at the IHH Humanitarian Relief Foundation.

“He was a very sensitive person. Just because there are hungry people in Palestine, we drank only soup at our home for 20 days. ‘Palestine is just in our words, we cannot do anything for them,’ he used to tell me. He wanted to join the flotilla. I was also willing to take part in it but I have two kinds and there were not any relatives in İstanbul to take care of our children. I could prevent him from joining the flotilla. I knew how he was disturbed by the pressure of his conscience. He kept telling me that the ship would stay in international waters and will not enter Israeli waters,” she said.

Kılıçlar who said her husband was responsible for the press room and journalists onboard the ship, added: “My husband finished his work before boarding the ship. He completed the necessary preparations for the live broadcasts. I prepared his luggage. I put the items that he would need. I never put any sharp objects.”

“We were married for 25 years. We met each other during high school years. I lost most part of my life with his loss,” said the woman in tears.

Kılıçlar voiced her belief that the Mavi Marmara trial would break taboos. “I have complaints about them because those addle-brained people hit my husband in the brain,” she said.

Wife of Necdet Yıldırım, who lost his life in the attack, Refika said she was married for 2,5 years and her life became  upside down with the loss of her husband.

“He was my shelter. When his body was brought here, I wanted to look at his face, he was like sleeping in the coffin. There was a beautiful smile on his face,” she said.

There were emotional moments in the courtroom following Yıldırım’s remarks. Many victims and lawyers who were moved by the woman’s remarks left the courtroom.

Continuing her testimony, the woman said her husband’s funeral coincided with the birthday of her daughter, Melek who was deeply affected by the death of her father.

“My daughter says there is not my father in my dreams. I don’t want to have any dreams. We take flowers and stones from my husband’s grave and keep them. I want those who make Melek shed tears to give an accounting for their actions. I want the trial and execution of the suspects,” added the woman.

One of the lawyers of the Mavi Marmara trial, Atty. Cüneyt Toraman said: “The cameras of the victims were seized but those who shot those footages are in front of as witnesses or victims now. The fact that the suspects are high-ranking military officers leads to a perception among the people as if political crimes are the subject of this trial. This trial is a criminal trial because actual crimes were committed. This is not the first trial in which foreigners stand trial. Sentences were handed to the French captain in the Lotus-Bozkurt case. According to Code of Criminal Procedure (CMUK), even if the suspects do not want, a lawyer has been appointed for them.”

In addition, Atty. Necati Ceylan also demanded the arrest of the Israeli suspects.

The court ,which gave a break for consultations, announced that the Mavi Marmara trial was adjourned to Feb. 21, 2013.